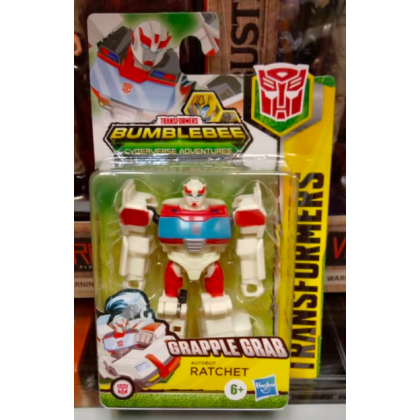 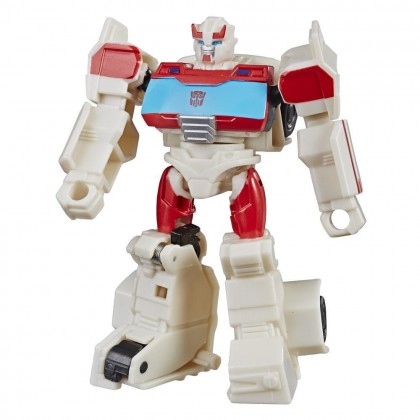 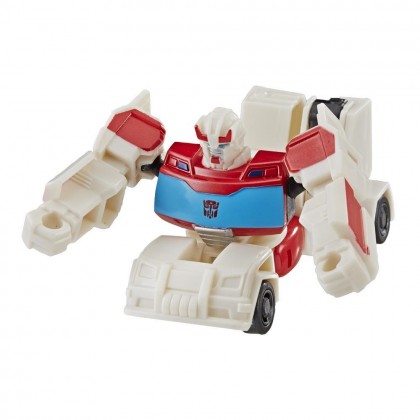 • 3.75-INCH AUTOBOT RATCHET FIGURE: 3.75-inch Scout Class Autobot Ratchet Action Attackers figure inspired by the Cyberverse animated series. Similar figure scale to Legion class Transformers action figures.
• 2-IN-1 TOY: Easy conversion kids ages 6 and up can do! Easily convert Autobot Ratchet toy from robot to tow truck mode in 6 steps. Makes a great gift.
• SIGNATURE AUTOBOT RATCHET ATTACK MOVE: Convert the heroic Autobot Ratchet to activate Grapple Grab Action Attack move. Fun attack moves can be repeated through easy reactivation steps.
• G1-INSPIRED CLASSIC CYBERVERSE CHARACTER: White robot with signature red stripes designed to look like the selfless medic from the Cyberverse cartoon.
• TV-SHOW-INSPIRED: Transformers robots are giant battling bots from the planet Cybertron. The Autobots and Decepticons traveled from Cybertron on their spaceships, the Ark and the Nemesis, in pursuit of the powerful Allspark. Each Transformers robot has 2 modes. They convert from robots to vehicles such as cars, trucks, jets, and tanks! Each bot has a special ability known as an Action Attack move; these signature attack moves activate in battle! In season one of the Cyberverse television series, Windblade helps Bumblebee connect to the Hivemind to recover his lost memories.
• Figure scale: 3.75 inches
• Ages 6 and up
• Warning: Choking Hazard - Small parts may be generated. Not for children under 3 years.

"Picture this: me, on Earth, still cooler than everyone this side of Optimus Prime, but I've got zero memories. Now I'm on a mission to recover my memories and discover all of my awesome powers. I'll have to battle Decepticons, outrun an explosion or two, and be heroic- basically, I'm in for one epic ride across the Cyberverse."
-- Bumblebee